Originally published at Huffington Post, April 30, 2014 by Will Reynolds.

Fracking has begun in Illinois. Governor Pat Quinn’s Department of Natural Resources issued a permit for a test well at a site where oil fracking is planned. The well isn’t subject to Illinois fracking rules due to loopholes in the law passed last year.

By utilizing methods that require a lower volume of water, and exploiting other loopholes, oil frackers can avoid new regulation. As Illinois State University emeritus professor William Rau writes, that will deny the state tax revenue from those operations, along with other consequences.

The public doesn’t yet know how much horizontal fracking will occur outside compliance with the law. Illinois residents are facing a major public safety crisis and state politicians don’t seem to notice.

Opposition continues as people learn more about the inadequacy of a law that was written behind closed doors and rushed through the legislature with very little public scrutiny. A recent day of action saw citizens in Chicago and southern Illinois bring accountability to those responsible for the dangerously weak fracking law.

“For sale” signs were placed at the campaign office of state representative Mike Bost, who co-sponsored the law while claiming it would “keep our air clean, protect our water supply and maintain our environment.” In fact, the law contains no provisions to limit toxic air emissions that harm the health of those living nearby. 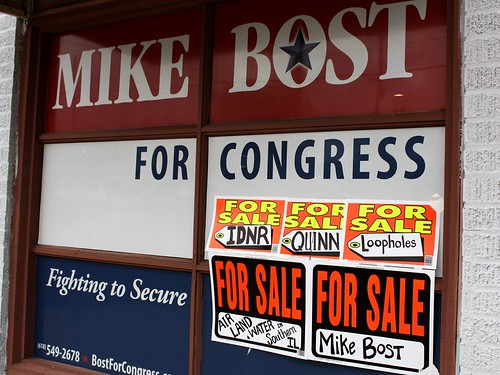 Bost is running for U.S. Congress in Illinois’ 12th district. Like many legislators, he mistakenly believed the fracking law was a consensus issue. Now, he’s confronted with the reality of people in his district outraged at seeing the law-making and rule-making process up for sale to the oil and gas industry.

People want clean renewable and sustainable jobs. Illinoisans will be left holding the tab when the boom and bust cycle of fracking and dirty extraction is gone. Politicians like Mike Bost are stuck in the last century. They need to get with it.

In Chicago, a “tour de frackers” visited offices of politicians and organizations responsible for bringing the fracking crisis to Illinois. A notice of violation against people and our environment was issued to the Illinois Chamber of Commerce, which spent over $20,000 to mislead voters about a fracking ballot referendum in rural Johnson county.

Next, the Heartland Institute was cited for producing embarrassingly offensive attacks against the scientific reality of climate change. And of course, they stopped at the offices of Governor Pat Quinn, who bragged of bringing fracking to Illinois to create jobs and solve the state budget problem.

Quinn isn’t bragging about his fracking law anymore. He clearly wishes the issue would go away as he faces frequent public embarrassment during a difficult re-election campaign. But, environmentalists and many southern Illinois residents aren’t going to forget Quinn’s betrayal before election day. He’ll have to stop fracking if he hopes to win back their support.