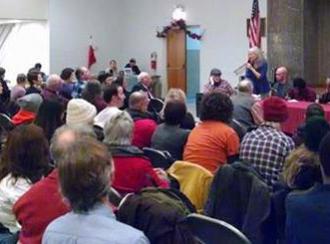 The purpose of the Convergence is to address the interconnected crises of the economy, ecology, peace and democracy, which all have their roots in a system driven by profit.

Supporters of the initiative hope to build a unified movement that can link climate justice to the many other issues of social justice, including economic inequality, the racism of mass incarceration and mass deportations, the sexism of the ongoing attacks on women’s reproductive rights, systemic oppression of LGBTQ people, continual attacks on working people’s living conditions through austerity measures and union-busting, and more.

The Chicago meeting was intended to launch the Convergence and begin preparing for its first call–10 days of action from Earth Day on April 22 through May Day that will connect ecological activism with the struggles for workers’ rights and human rights.

“We are a thousand movements taking place across the planet,” Stein told the meeting convened in the auditorium of the United Electrical Workers hall. “If only we can synchronize those movements and get out on the same day, it would bring the whole machine to a grinding halt!”

THE MEETING was kicked off by Sherri Mitchell, an indigenous rights activist and member of Penobscot Nation, who spoke about the need to protect our land and water from corporate interests. “Our lands are being hydrofracked,” she said.

Next was DeChristopher, an activist who served two years in prison for an act of civil disobedience–disrupting an auction of land parcels in Utah. DeChristopher emphasized that climate change was not just an environmental issue, a point made frequently throughout the forum. He spoke to the need for the climate justice movement to aim to change the status quo, and replace it with a society in which greed and competition are not seen as its main values. As he concluded, “We can’t fight just one piece of oppression on its own. All struggles against injustice are one struggle.”

Chris Williams called out global capitalism for the barbaric system it is, by citing just two statistics from the 2010 U.S. census: 3.5 million people in the U.S. experienced homelessness over the course of a year, while at the same time, there were 18 million empty homes.

Statements like this from Williams and from other participants focused head-on on the contradictions of capitalism–and the need for radical system change to alleviate the injustices of today’s world. They were in keeping with the slogan for the convergence: “People, planet, peace over profit.”

Stein talked about the call for a 10-day period of action between Earth Day and May Day. One goal, she said, would be to “take back Earth Day from the corporations” that have co-opted it. Stein referred to the time from Earth Day to May Day as the “continuum of justice”–since it bridges the gap between the struggle for environmental justice and the struggles for workers’ and immigrant rights.

The demands of the Global Climate Convergence not only tie together intersecting struggles, but put forward a vision of a radically different society that operates according to need rather than profit.

Its goals would be full employment; 100 percent clean and renewable energy by 2030; universal free health care and education; economic democracy with public owned banks; a 50 percent cut to the military, freeing up $500 billion a year; an end to mass incarceration and deportations; political democracy for all, not just the wealthiest; full civil liberties; support for the rights of Mother Earth; and more.

These goals will only be achieved by masses of people coming together in a unified movement, which is exactly what the Convergence is working towards.

Tyler Hansen and Carlos Enriquez report from Chicago on a meeting that brought together individuals and organizations to launch the Global Climate Convergence.

Previous Post: VIDEO: Earth Day to May Day 2014 Launch in Chicago
Next Post: A Call to Action for People, Planet, and Peace over Profit