The kids suing Donald Trump are marching to the White House

Washington (CNN) A 16-year-old walked up to the microphone.

“The state of the planet is unraveling all around us because of our addiction to fossil fuels,” Xiuhtezcatl Martinez said at the steps of the US Supreme Court this week. “For the last several decades, we have been neglecting the fact that this is the only planet that we have and that the main stakeholders in this issue (of climate change) are the younger generation. Not only are the youth going to be inheriting every problem that we see in the world today — after our politicians have been long gone — but our voices have been neglected from the conversation.

“Our politicians are no longer representing our voices.”

So, what’s a voiceless kid to do?
How about sue President Donald Trump and his administration — and then march to the White House?

Martinez is one of 21 young people taking Trump and members of his administration to federal court over inaction on global warming. On Saturday, several of these “climate kid’ plaintiffs — the youngest is 9 — will walk alongside the chanting and sign-pumping adults at the March for Climate, Jobs and Justice in Washington. That demonstration is a call for a clean energy revolution, and it’s expected to draw thousands. Perhaps fittingly, local forecasts call for potentially record-setting temperatures above 90 degrees Fahrenheit. Demonstrators plan to converge on the White House.

Yes, it’s easy to tire of protests in the Trump era, with this rally coming right on the heels of last week’s March for Science and not so long after the Women’s March. Talk is cheap. But these climate kids deserve your attention.

Instead of bemoaning the Orwellian satire that has become the American news cycle, these kids are doing something. They’re suing on behalf of the future.

Their lawsuit, which was filed in federal court in Oregon, initially targeted then-President Barack Obama and his administration. Last year, it survived motions by industry and government to dismiss the case. It has taken on new significance in the first 100 days of Trump’s tenure. The President has famously called climate change a hoax, and members of his Cabinet have equivocated on the science, injecting doubt into a long-held scientific consensus that humans are causing the planet to warm by burning fossil fuels and pumping heat-trapping pollution into the atmosphere.
The administration’s efforts go well beyond rhetoric. Trump ordered a review of the Clean Power Plan, Obama’s signature climate legislation. He aims to open federal lands and ocean for fossil fuel extraction. Coal jobs are coming back, he crows. Nevermind that millions of people around the world die each year from diseases linked to air pollution — much of which comes from coal.
The administration is reportedly mulling pulling out from the Paris Agreement, an international accord designed to push the planet out of the fossil fuel era. Federal monuments and parks are under review; funding for regulators is on the chopping block.

All of this is likely to lead to more pollution and therefore more warming — more wildfires, longer droughts, rising seas, mass extinction. This is the polluted and dangerous world we are creating, and it’s what’s chasing activists into the streets.

The climate kids could help change the tide.

They’re arguing on constitutional grounds that their rights to life, liberty and property are being violated by runaway climate change. Their attorneys also say these kids and others are being discriminated against as a class of people.

Since they’re young, they will live longer into the climate-changed future.

They’re people like Levi Draheim, who at 9 years old is the youngest child plaintiff. He’s a bubbly kid with wild curly hair who lives on the coast of Florida, a place threatened by rising seas. As the Earth warms, the oceans expand and ice melts. Draheim told me he dreams frequently that his home is underwater. Those dreams have only become more frequent since Trump’s election, he said. 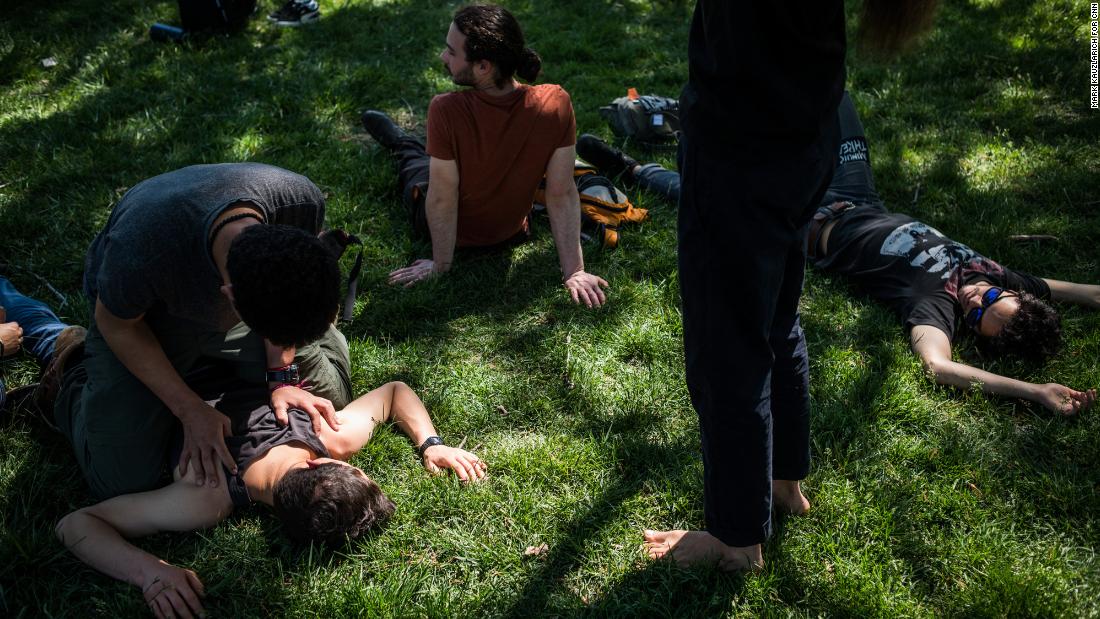 The kids suing Trump and his administration are among thousands expected to gather this weekend in Washington.

Draheim isn’t old enough to vote, of course. But Saturday’s march — and the court case — give him and other kids a voice. Julia Olson, an attorney and founder of Our Children’s Trust, the nonprofit helping to bring the lawsuit, told me she expects the case to go to trial later this year. In court, she told a Washington crowd, “alternative facts are perjury.”

Experts in climate law say the suit may be a long shot but remains significant.

“The case is important, in my mind, from a symbolic and ethics perspective,” said Deborah Sivas, director of the Environmental Law Clinic at Stanford Law School. “It often takes the law a long time to catch up to changing moral sensibilities. It only does so when people are willing to press innovative, outside-the-box arguments. My hope is that we will be able to look back on this case as an early, first mover of a changing jurisprudence.”

“After several years with little success, environmental plaintiffs have now won climate change cases in several countries based on constitutional, human rights and international law grounds, as opposed to the more traditional statutory grounds — the Netherlands, Pakistan, Austria and South Africa,” Michael Gerrard, director of the Sabin Center for Climate Change Law at Columbia Law School, said in an email. “The Oregon case now joins that list, and its symbolic importance has added weight now that Washington is run by climate deniers.”

Olson, the attorney for the kids, said the case is not symbolic and can win. Those who say otherwise “are denying the capacity of humans to take care of democracy and take care of the planet,” she said.
I spent a couple days this week with the climate kids. I heard about their visits to Washington museums and to see the Constitution. I watched as they sang and danced at DC Metro stops, playing Kendrick Lamar simultaneously on two phones to get twice the experience. I talked to them about their hopes and fears about this case, about why so many American adults — 47% according to a Yale survey — don’t understand humans are causing global warming. They explained why they’re marching and speaking here even at a moment when they worry adults might not listen.
“Most people know climate change is happening, but they push it aside so they can continue living their lives,” said Isaac Vergun, 15.

Their hope and generosity are infectious. Their parents and attorneys didn’t put them up to this. (I’ve talked with kids who had to convince their parents to let them do this.) The kids are genuinely concerned their generation will inherit an irreparably messed-up world.

The truth is that we adults need these climate kids.

We need them more than thousands of adults marching on Saturday.

We need them as a moral compass.

And we need them to remind us that our actions will echo for generations to come.

“They’ll be adults by the time they get to court,” Cherri Foytlin, one of their parents, joked as we watched several of the kids speak alongside US senators Thursday at the Supreme Court.

I hope not. But if so, they’ll be better adults than most.
Previous Post: CLIMATE WORKERS: An Open Letter from Environmental & Climate Justice Organizations on May Day
Next Post: THE WORKER INSTITUTE: Reversing Inequality, Combating Climate Change